The last working week has been come to an end. The Day of Knowledge is behind. A new school year began. We need to gather strength and take the next challenge. It will take a place next week, but what about now? Now I want to talk about the issue, which we arranged with my girlfriend Anna last weekend.

Saturday night we went to Tallinn with the sole purpose – to get around as much as possible in 24 hours. Bars, cafes, sights and simply beautiful places – such was the task. And here is the result:

Once we arrived in Tallinn and walked to the center, a girl approached us to walk together. Her name is Christiana, she is a Latvian. According to her, the guy left the girl because she was drunk. Christiana’s phone was lost somewhere and she asked us to call her a taxi. “I remember the address, and I have money, but the phone … I do not know, I’ve lost it.” We asked the locals for help. Two girls and a guy responded to our request. While waiting for a taxi, a car drove up, from which a Latvian guy came out. We transferred the case under his jurisdiction and moved further towards the center.

In search of a place where you could drink (“Duty Fri” bus driver drove without explanation), we came across a group of guys who lined the column playing Russian music. In general, there were many Russians around, but we decided to approach them and find out where it is better to buy alcohol.

“Call alcotaxi,” they said, “so it is convenient: the price is ordinaire, for shipping only 5 euros are taken.” But alcohol in Estonian shops are soooo expensive. So we talked with them a bit and went to the bars then. Honestly, we went only to one Scottish pub, where we drank a terrible cider. But we had a great time walking along the narrow streets of the Old Town passing several bars, clubs and closed restaurants. And most importantly – it was very warm. It was raining, but it was not there.

It was four in the morning we sat on the steps of the same Town Hall, when a company of five people, three guys and two girls passed by. One of the guys was talking about a game in which “we play in Ukraine.” They stopped near us. Ten minutes later, two girls passed by, apparently returning home. The Ukrainian was rolled up to them, accompanied by a friend, with unsuccessful try to pick-up them. Afterwards he was surprised when he saw and realized that their company was attended by girls. Alcohol does wonders, what can you say.

P.S. most of the “wi-fi” points in the restaurants are password protected. But the fantasy of the guys is bad. highlander and laborbaar are only 2 examples. Use it! 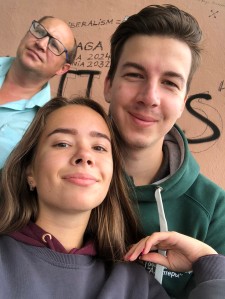 UPD: this post is participating in EsmeSalon link-up week, where you can read plenty of posts on diffetent topics. I so appreciate that possibility to share my stories with other bloggers and readers. Visit the link above and have a good time 🙂